I hardly ever bake, much less when it's 95 degrees outside and not much cooler inside. Colorado summer days can be quite hot but we're a mile closer to the sun, right? Those hot days lead to a great peach crop harvested on the Western Slope of Colorado and eagerly awaited by all of us on the other side of the Continental Divide. I was so hyped up by all the TV ads showing luscious ripe fruit that I made a peach pie. But since I hadn't planned ahead and let the peaches ripen for a few days I had to wrestle those babies to get them sliced and pitted. There are no severed fingertips in the photo below. 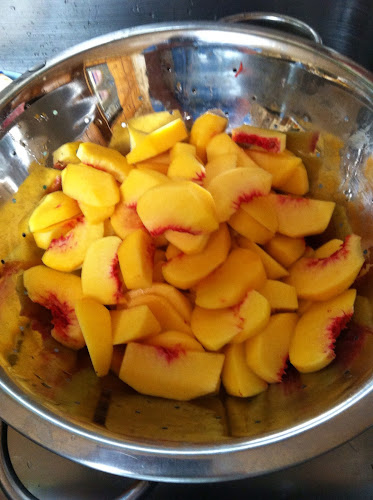 I prebaked the pie crust but it shrunk a little. These things happen. 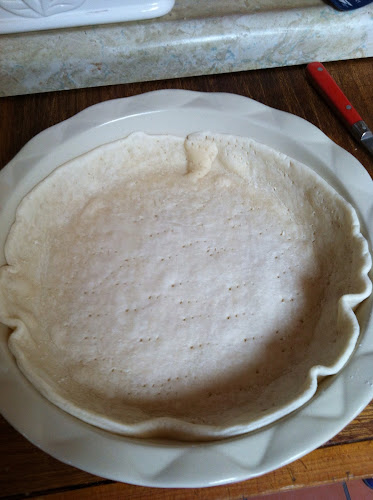 So I decorated the top real cute with these fancy cutters I got at Williams-Sonoma. 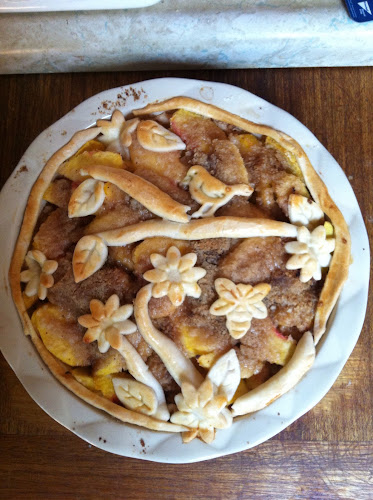 I made my own pie garden with a bird on a branch and a bumblebee hovering above the peaches. 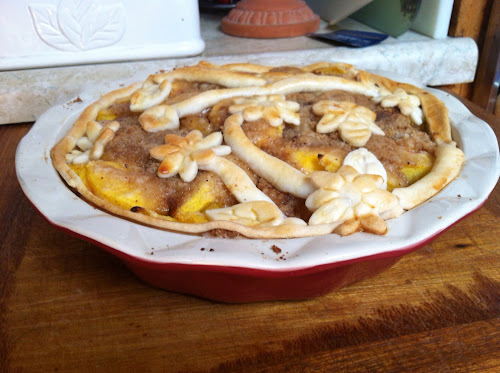 And who better to eat this garden-y peach pie than The Dubious Gardener and The Reluctant Gardener? 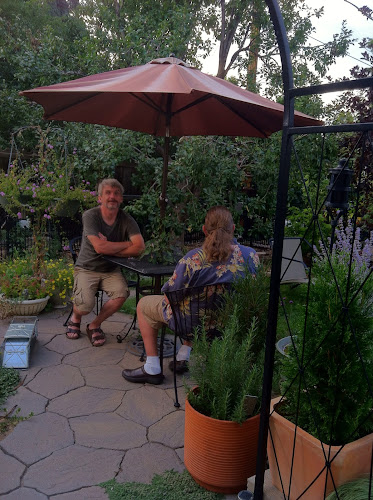 It was a pretty good pie and probably the last thing I'll bake 'till Thanksgiving. But who wants to think about that? For now I'll enjoy the summer heat and the last peach which is now ripe. 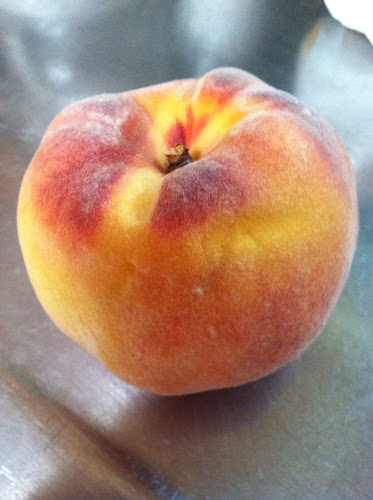 Posted with Blogsy
Posted by LostRoses at 9:26 PM 6 comments:

...and I can't actually show you but I can tell! See this birdbath fountain below? Yes, I know it's a crummy photo but iPhones aren't great at at zooming in. Notice where the chickadee is - that's the bubbler that brings the water up through the fountain. A lot of birds prefer to drink right from the bubbler but they bathe in one of the bowls below it. 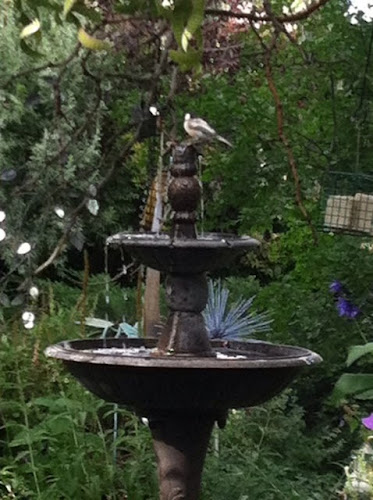 Today I was sitting on the back porch frittering the afternoon away when I glanced up and happened to notice what I thought was a really large bumblebee in the bubbler. At second glance I was astonished to see it was a female Broad-tailed hummingbird. Taking a bath. In the bubbler. Whooee! How clever of her - just her size, too. I was too awestruck to remember to grab my iPhone, and when I did I was seconds too late. Bath over. Here she is a few minutes later getting all sticky again at the Black and blue salvia. Another bad I-photo. 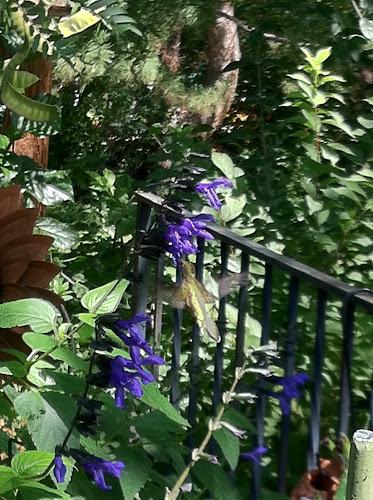 I get hummers daily at this time of year and I'd never seen one even get close to a water source, much less take a bubbler bath. I guess they get plenty of liquid to drink from the flower nectar but their little bodies must get sticky from it too. I wonder if they would like the mister? I think I'll set it up and find out.

Posted with Blogsy
Posted by LostRoses at 10:02 PM 8 comments:

The other evening I accompanied The Reluctant Gardener, The Dubious Gardener, and The Expert Gardener to a local garden center which was having a flower show, a car show, and a free barbecue. Free entertainment, and I don't need much of an excuse to go to the nursery. We ate barbecue immediately - didn't want to miss out on that. While Reluctant and Dubious toured the car show in the parking lot (and got seconds on the food) Expert and I took a look at the flower show. To our surprise it turned out to be a judging of trial plants that weren't available yet. The staff gave everyone three flags and we were instructed to place them in each of our three favorites. Okay, now that was fun! We saw plants in colors that variety hadn't come in before, like this orange calibrachoe. After the judging we could buy them so I did. 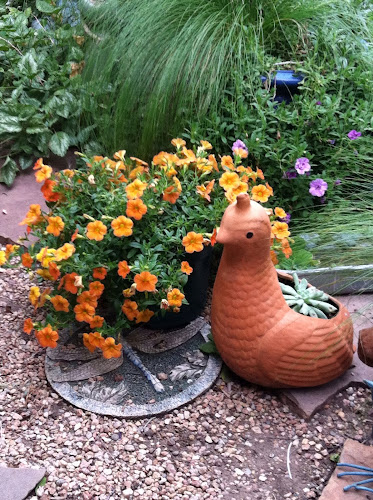 They said the ones with the most flags will be the varieties they buy a lot of next spring. Pretty clever of them. But not everyone likes orange flowers. Apparently I do because I bought this orange petunia too. 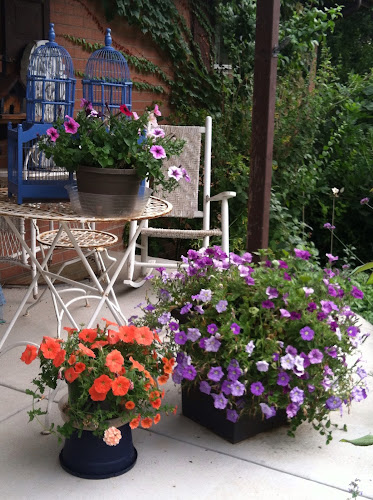 This reminds me there's an orange Popsicle in the freezer waiting for me.

Posted with Blogsy
Posted by LostRoses at 6:37 PM 9 comments:

Seashells. I love them. Since I was a little kid living in Florida I've been fascinated by them. Found on the beach or bought in a shell shop - I wasn't picky. None of those shells survived the "way too many" moves but I've managed to look for seashells anytime I'm near a beach. Or a garage sale. People sell their souvenir shells - really. That's okay because I'm likely to buy them. Yesterday it occurred to me that I should sort the shells and put them in a container I found at a flea market. First I had to rinse them all off and pick out the leaves and stuff that had fallen into their bowls. They've been outside for awhile. Then I spread them out on a mesh top table to dry. 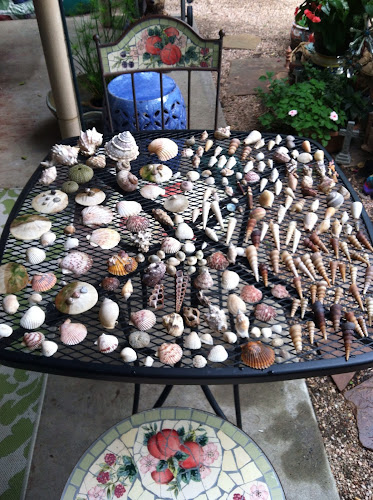 I'd like to just leave them here - they look cool. But that won't do. 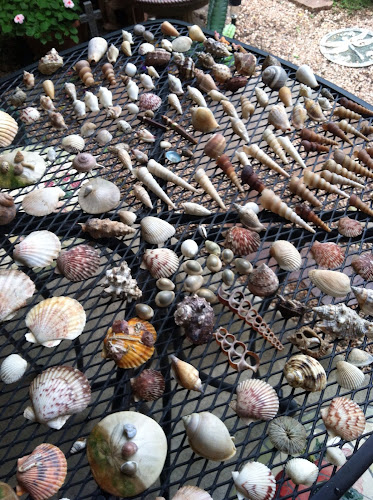 I seem to be especially fond of the spiral ones. 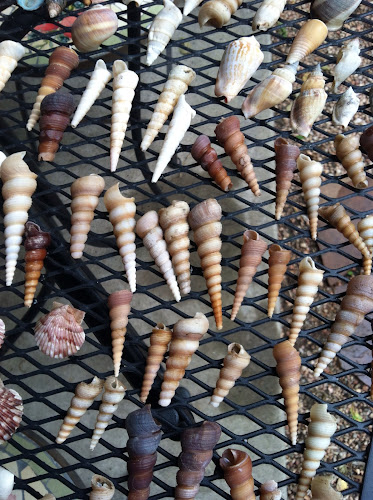 I remember finding one of these pincushion shells on Sanibel Island at about age 8. I was thrilled. But I stepped on it later that day. Lots of tears. My mother asked me why I put it on the floor. As a grandmother of five I now know the answer is "I don't know!" delivered in a mournful wail. 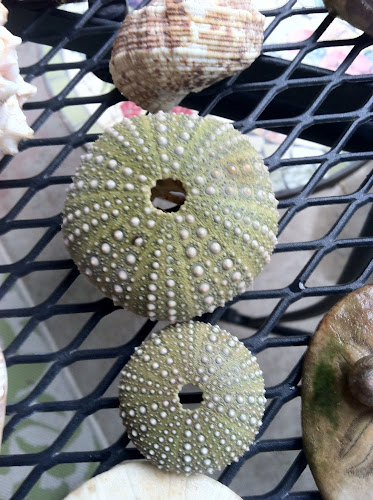 Some of the shells are so dinky I had to set them on top of the sand dollars so they wouldn't fall through the mesh. 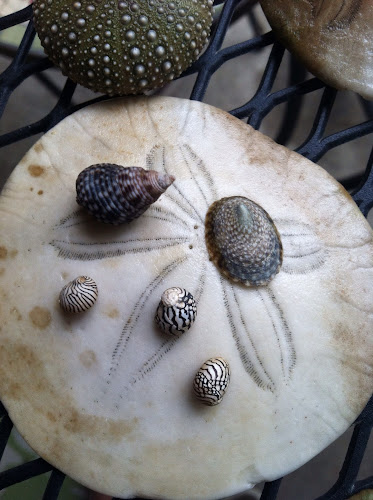 Here's the thing I bought at a flea market. Not sure what this was ever used for. Maybe a display for a bakery countertop? Not sure why I bought it either. Or what I was going to do with it. It took me two weeks to think up the seashell thing. 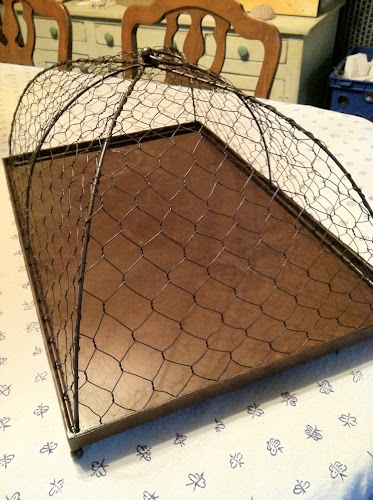 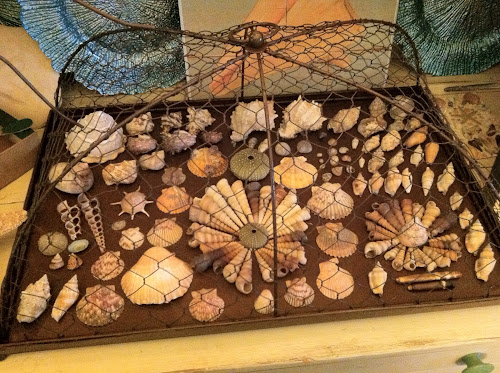 This is my seashore beachy theme hutch for the summer. Kind of overdone but I never know when to stop. And it's a great improvement over the Christmas Village that was there until mid-July. Seashells are better. 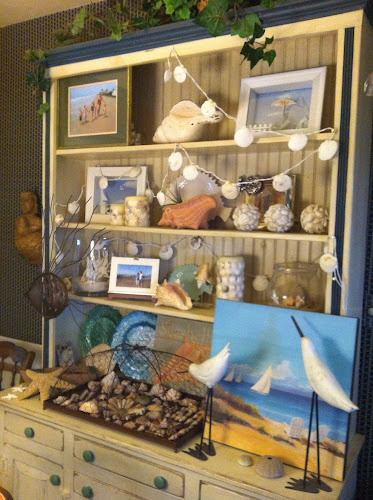 Posted with Blogsy
Posted by LostRoses at 5:47 PM 8 comments:

We were on a road trip last week - the Dubious Gardener, me, and two of The Adorable Grandchildren. Our cabin near Bassetts in northern California was surrounded by these grand trees - white fir. I was in awe. Children in the hammock below were dwarfed by these giants! 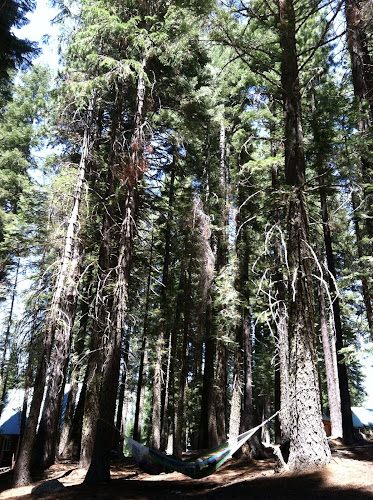 Posted with Blogsy
Posted by LostRoses at 7:43 PM 2 comments: 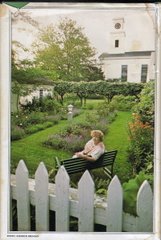